How to improve the energy efficiency of boiler systems

A lot of light commercial and residential buildings in the U.S. have older boiler heating systems that are inefficient and could benefit from higher efficiency retrofits or boiler replacements. The following are examples of what could be done to improve their energy efficiency, reduce the operating costs, extend the life of the equipment and increase building occupants comfort.

New boilers under 300,000 BTUH are required to display an annual fuel utilization efficiency (AFUE) rating. This is essentially a ratio of heat output to the fuel used to power the boiler. For example, a rating of 85% means 15% of the energy in the fuel wasn’t used for generating heat.  This is also thought of as fuel-to-steam efficiency. Learn more about efficiency ratings here.

Every boiler will have its own efficiency strengths and weaknesses, but there are some elements across the board that affect performance. Heat exchangers are one of the key factors affecting efficiency, specifically, wow well they transfer heat from combustion to the water in the tank. Heat loss is another factor. Heat that escapes via convection or radiation from the boiler is not being efficiently distributed. One more important variable is how well a boiler’s burner burns its fuel, whether it leaves unburned fuel or how it exhausts.

Tips for increasing the energy efficiency of your boiler system

Whether you’re looking to figure out how efficient your boiler is or already know you want to improve heating efficiency, there are several things you can consider to inform your decisions. From updating controls to proper sizing, there are options.

Replacing old, inefficient non-condensing boilers with high efficiency boilers can lead to significant energy savings. A typical non-condensing boiler extracts the sensible heat generated during the combustion process. A condensing boiler can extract both, the sensible and the latent heat, the amount of energy absorbed when the water is turned into vapor. For the latent heat to be released from the flue gases, the temperature of the flue gas has to be below its dew point which is typically around 135 degree F (the exact dew point temperature depends on the content of the fuel and also on the amount of carbon dioxide in the exhaust gas). When the flue gas temperature drops below the dew point, the water vapor condenses releasing additional Btus of heat. If all vapor could be condensed, approximately 10,100 Btu/therm of gas consumed would be released resulting in 10 percent energy gain. The amount of latent heat recovered depends on the flue gas temperature. The lower temperature the more latent heat is released.

In many buildings, the heating load has changed over the years due to improvements in insulation (tighter building envelope), newer winding and doors, newer roof, occupancy levels and internal heat gains from other sources such as operating equipment, lighting and computers. It is important to make sure that the boiler system is matched with its application and need for redundancy. In some cases, separate boilers should be used to handle the domestic heating water while other would handle central heating needs. The most effective way to retrofit your older boiler system is the "hybrid" system, a combination of an older boiler, still functioning, with the new high efficiency boiler. In this scenario, a high mass non-condensing boiler will run during the peak heating load periods, usually less than 5% of the heating season, while the condensing boiler will handle heating loads when the outdoor air temperatures are above the max. design point (part-load conditions that exist most of the time). The hybrid heating system will allow you to maximize the overall efficiency of the heating system while keeping your retrofit costs down and at the same time will provide redundancy. Replace only what’s needed and maximize your savings. 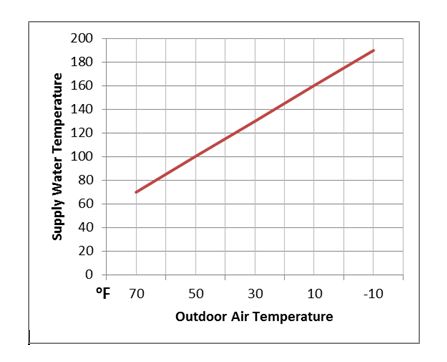 Outdoor air temperature reset and warm weather shutdown controls when applied correctly can result in significant energy savings making condensing boiler a viable solution. Neither the reset control nor the warm weather shutdown is applicable in the domestic hot water operation making the condensing boiler less effective. These control methods when used properly with night/weekend setback schemes can result in energy savings of up to 50 percent.

How much money you can save depends on your utility rates, run hours, difference in boiler efficiency and the heating load (size of your system). The following is a formula used to calculate the seasonal operating cost of the boiler:

Each one of the above components affects your $ savings and can be addressed. The utility rates can some time be renegotiated, the run hours can be optimized based on occupancy levels, the heating load can be reduced by minimizing the building heat loses and finally the boiler (system) efficiency can be also addressed. Boiler upgrade or replacement is just one way of increasing efficiency. Another way would be running multiple boilers vs. single boiler. Modulating boilers will also improve efficiency by running equipment at reduced loads and thus reducing cycling time (number of starts and stops).

"Meter is on the building" - efficiency should not be addressed only at the boiler level but instead it should be looked at from the entire system perspective. Choice of fuel and ability to switch between different fuel types (dual fuel) to take advantage of the off peak load rates can greatly improve the operating costs. Since the prices of natural gas are currently at the lowest point, retrofitting boilers from oil to gas can significantly reduce the operating costs. Pumping costs can also be reduced by using variable primary system vs. primary secondary loop.

In new buildings, using a larger delta T (30 degree F and higher) can result in significant energy savings. First of all, designing a new heating system with the large delta T allows to reduce the flow through the system resulting in smaller pumps (lower installed cost). Existing heating systems can have pumps retrofitted with variable frequency drives (VFDs) that can further improve the efficiency of the system. Wider delta T can also help lower the return water temperature resulting in higher condensing rate contributing to higher boiler efficiency. It often is advantageous to use multiple boilers in condensing applications. Multiple boilers with turndown capabilities facilitate better overall system load matching. By installing smaller and multiple condensing boilers, a facility manager can stage the boilers depending on the heating load, which will help save fuel compared with a system that uses one larger boiler.

The performance of the heating system will reduce over time without proper care and annual maintenance. This includes seasonal start, shut down, cleaning heat exchanger when needed and monitoring water chemistry. Hard water can result in scale deposits lowering the heat transfer rate. Large deposits in the heat exchanger will also reduce the heat transfer rate and negatively affect the boiler efficiency. The insulating effect of deposits will cause the flue gas temperature to rise preventing condensation which in turn will decrease boiler efficiency.