Many residential homes use boilers to heat water, and provide either hot water or steam for heating. Steam is distributed via pipes to steam radiators, and hot water can be distributed via baseboard radiators or radiant floor systems, or can heat air via a coil. Steam boilers operate at a higher temperature than hot water boilers, and are inherently less efficient. Weil-McLain offers both water and steam boilers that can potentially provide a substantial efficiency increase over a homeowner’s current model. The heating professional, in conjunction with the homeowner, can ensure a smart investment by choosing the correct boiler for the application, achieving the right balance of cost and efficiency.

Boiler efficiency is measured by annual fuel utilization efficiency (AFUE), for units under 300,000 BTUH input. The Federal Trade Commission requires new boilers to display their AFUE so consumers can compare heating efficiencies of various models. AFUE is a calculated efficiency which attempts to estimate how well the appliance converts the energy in its fuel to heat over the course of a typical year.

Specifically, AFUE is the ratio of annual heat output of the boiler compared to the total annual fossil fuel energy consumed by a boiler. In general, an AFUE of 90% means that 90% of the energy in the fuel becomes heat for the home and the other 10% escapes up the chimney and elsewhere.

The minimum AFUE rating requirements for boilers varies based on the type of fuel and the heating medium used. As of September 1, 2012, all boilers manufactured have the following minimum AFUE ratings: 82% for a gas-fired hot water boiler, 80% for a gas-fired steam boiler, 84% for an oil-fired hot water boiler and 82% for an oil-fired steam boiler. In addition, gas-fired boilers are not permitted to have a constant burning pilot, and hot water boilers are required to have an automatic means for adjusting the water temperature to match the inferred heat load.

Today’s newest cast iron boilers are much more efficient than those existing in the field 20+ years old, so an upgrade can potentially provide significant savings when replacing a cast iron boiler with a new cast iron boiler when used in the correct application. Weil-McLain offers one of the highest efficient cast iron gas boilers on the market today, our GV90+. The GV90+ boiler has an efficiency rating of 91.9% and can vent with PVC material.

In certain instances, a homeowner might not be financially willing or able to replace the boiler. Boilers can sometimes be retrofitted to increase their efficiency. These upgrades improve the efficiency of otherwise sound, older systems. But the costs of retrofits should be carefully weighed against the cost of a new boiler, especially if replacement is likely within a few years. Retrofits are fuel-specific, but in general, some retrofitting options that can improve a system's energy efficiency include installing programmable thermostats, adding zone control for hot-water systems, and/or installing outdoor reset controls. Water treatment products can also be used to improve system circulation, heat transfer and help prevent scale buildup.

Although older boilers had efficiencies in the range of 56% to 70%, modern boilers can achieve efficiencies as high as the mid-nineties, converting nearly all the fuel to useful heat for the home. Energy efficiency upgrades and a new high-efficiency heating system can often cut fuel bills and emission output in half. Upgrading the boiler from 56% to 90% efficiency in an average cold-climate house could potentially save 1.5 tons of carbon dioxide emissions each year if heated with gas, or 2.5 tons if heated with oil.

If the boiler is old, worn out, inefficient, or significantly oversized, the simplest solution is often to replace it with a modern model. Old coal burners that were converted over to oil or gas are prime candidates for replacement, as well as gas boilers with pilot lights rather than electronic ignitions. Regardless if it’s a planned or unplanned boiler replacement, a properly sized boiler will operate the most efficiently when properly matched to the application of the home.

In general, an estimate of the annual savings from heating system replacements can be made by using the table below, which assumes that both heating systems have the same heat output and the boiler is properly matched to the home’s application. However, older systems are typically oversized, and will be particularly oversized if the homeowner significantly improves the energy efficiency of the home (has new doors, windows, insulation, etc.). Because of this additional benefit, the actual savings in upgrading to a new system could be higher than indicated in the table. 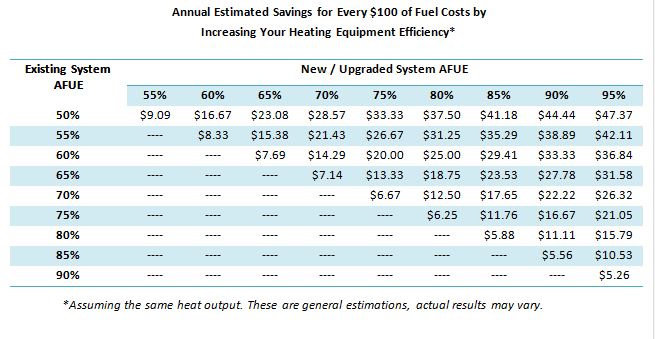 Rest assured, that no matter your choice, Weil-McLain’s line of boilers have set the industry standard for innovation, design, ease of installation, reliability and efficiency while delivering peace of mind, unmatched comfort, and payback in energy savings for homeowners.